A limited edition whisky series collaboration designed to reflect the styles of some of the nation’s most cherished retired professional hockey players. 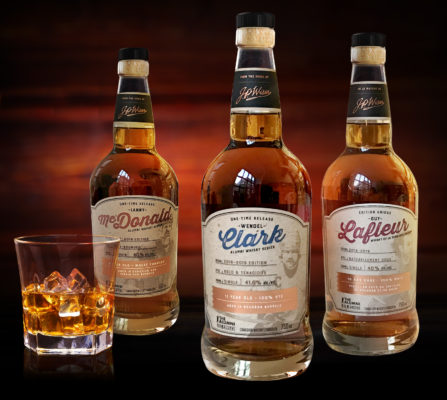 TORONTO – January 30, 2019 – This past fall, hockey and Canadian whisky tradition collectively inspired the development of a new limited edition whisky series, the Alumni Whisky Series, now available in select regions across Canada. Corby Spirit and Wine Limited partnered with the NHL Alumni Association (“NHLAA”) to create a whisky in association with its J.P. Wiser’s brand that celebrates the long-standing hockey and Canadian whisky heritage deeply rooted in our nation.

Pigeon was selected to build the overall packaging and creatively design each bottle label with a stamp of authenticity. They aimed to embody a collectable feel for Canadians while educating and bringing to life the diverse taste profiles of the three respective whiskies, commemorating Wendel Clark, Guy Lafleur, and Lanny McDonald. As a Canadian brand design firm, this was a task they would not take lightly.

“Pigeon is a long-standing partner of Corby Spirit and Wine Limited,” said Sam Jacobs, Brand Manager, Canadian Whisky. “Pigeon has a deep history of building iconic Canadian brands, and their creative approach and passion for this project was evident from day one.”

For inspiration, the team at Pigeon organized a hockey round-table session, where an assortment of hockey-lovers were invited to discuss their favourite memories, players, and their overall love for the game.

One thing stood out.

“We wanted to speak to fans directly to understand what drives their passion. In the end, a player’s personality and style were the most important attributes,” said Fiona Birot, Account Lead on the Corby business for Pigeon,“and that motivated the bottle branding approach for the Series. It needed to reflect the personality of both the player and the whisky. It was more than just a name on a bottle, it became a way to commemorate the achievements of the retired player within the context of a high quality Canadian whisky.”

Hockey isn’t like most sports. To the fans, on-ice player personalities are a major component of the game. Also, the connection the players have with their fans, and the loyalty and dedication they draw is special in hockey. And therein was the inspiration for the Alumni Whisky Series.  Each bottle is focused on a legendary retired hockey player — celebrating their playing style, moments that defined their careers, and each designed with the heart and passion of the player being commemorated.  The label has a vintage look, with its lifted textures, sepia tones, and copper accents creating the nostalgic and collectable feel that Pigeon envisioned. The challenge was to strike the perfect balance between paying tribute to the retired hockey legend and showcasing the premium quality whisky. The final design allowed the two to coexist seamlessly, creating a collectible piece of history that stands the test of time.

Availability Each of the three player whiskies have been launched as regional exclusives, to specially pay tribute to the province that they played in.  The lineup of the 1st Release of the Alumni Whisky Series includes: Guy Lafleur (Quebec), Wendel Clark (Ontario), and Lanny McDonald (Alberta). The retail price is approximately $45.00 per bottle.