Everyone knows of the painful waitlists in doctors offices for appointments. Now Luka Lamaj has figured out how to bypass this old, outdated system to create a direct stream from patient to doctor.

Lamaj is a businessman who invented the Docere app, and is a biochemistry major who immigrated from Albania to go to school in Canada. Thinking of even payment, the Docere app it’s versatile to all Canadians making payments with Interac, Paypal, bank payments and cryptocurrency. One of his main passions is history and has created an interesting podcast called Cool Historians, it’s appealing to anyone interested in learning any history sub genre. 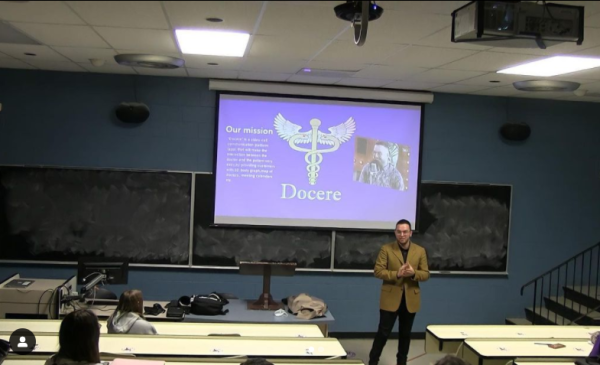 What inspired you to create the Docere app that helps the communication barrier between doctors and patients?

In September of last year, I had to go to a hospital in Montreal and I saw that the queue there was terrible. Since I come from a poor country in Southern Europe, and with a not very developed health system, I was impressed by how the queues in hospitals are the same as in a fairly developed country like Canada.

The fact that I study Biochemistry has probably made me more judgmental towards the HealthCare Industry in general. I was then confronted with a horrific statistic that 66 million North Americans do not have access to a doctor. This made me contact Ervis and Kevin who are co-founders of this platform we are creating, and I started working. When I started this company, one of my goals was a principle of Steve Jobs when he created Apple: My model for business is the Beatles.

They were four guys who kept each other’s kind of negative tendencies in check. They balanced each other, and the total was greater than the sum of the parts.”

So in principle, “Docere” is a video-call communication platform (app) that will make the interaction between the doctor and the patient easy, by providing customers with: 3D body graph, map of doctors, meeting calendars, etc. Our motto is “Hospital on Your Mobile”.

With Docere, we won the 3rd Place out of 200 companies on a National Level in Canada on a Pitch Competition organized by Canadian Council of Small Business and Entrepreneurship. We are considered as Top 10 Most Promising Canadian Startups by RBC. Recently I have been listed as Top 50 Albanian Personalities by Business Magazine Albania among names like: Dua Lipa, Ismail Kadare, Rita Ora etc.

Who is on the Docere app team and what are their roles?

For the coding part I contribute, but I as CEO am responsible for the financial part, business, fundraising, design etc. So I deal with everything little by little. The technical part of coding and technology in general are responsible for two talents like Ervis and Kevin, who are helping me a lot in creating the platform.

We also have some other developers who deal with the creation of the platform, where one of them is my brother Frank Lamaj. An important person for Docere is also the Advisor of our company Dr. Agostino Menna, where above all he is a professor, mentor and very good friend of mine. I think the biggest asset we as a technology company have are these wonderful and capable people who achieve impossible things.

As someone who immigrated to Canada for education, if you could change one thing to improve in this country, what would it be, and why?

Canada is a country I love very much. When I came here 2 years ago to study I got used to it very quickly because I felt at home, this is because of the people here. I think that Canada and America are two perfect places for people who want to be successful, as they have tremendous resources for everyone.Europe has many positive things, but it does not have the Freedom to Create (innovate) and the quality of Education System as North America.

Having said all that, I do not have anything that I would like to change for Canada, except mostly health care which is a bit confusing especially for immigrants. For example, one of our potential investors from Israel and I shared the same concern about this problem where he told us that it took him two years to find a Family Doctor during his stay in Vancouver. That is why we at Docere are trying to solve this problem, and fill these gaps in Canadian Health Care. Having said that, this is one more reason for me to stay in North America for a long time.

I love this question! I speak English, Italian, Albanian and German fluently, I have recently started learning Greek and French. As a person passionate about different cultures and geography, foreign languages for me are a treasure that never loses value.

I definitely want to attribute it to my family as well, they have always taken me to private language classes to learn new languages. The person who inspires me the most is my father, who speaks 7 languages.

I started learning English in the first grade at school. I learned Italian through various Songs or Shows on Italian channels as I have a lot of  love for Italy and Italian people, which comes from my grandfather who studied in Bologna. I learned German through private courses that my parents activated for me, while Albanian is my mother tongue.

When and why did you decide to start the podcast channel Cool Historians?

Cool Historians is a very special project for me as I talk about my passion since I was little: History. This is another thing I attribute to my parents, who have encouraged me to read History Books since I was a child.

I remember my mother telling me about the crimes of the communist dictatorship in Albania in the 70s and 80s, a dictatorship that she suffered a lot, and I listened to it carefully. From that period I started reading about those years in Albania. From that moment on, my passion for history grew until it culminated in the creation of Cool Historians in March 2021.

Cool Historians is a podcast, where I talk about different histories from all over the world in a short, simple, yet engaging format to turn history from the perceived boring into “cool” for the public.This is exactly also the meaning of “Cool Historians”. So far, I have launched 26 episodes, which have been heard in 44 countries of the world.

Thanks to this project, I even had the opportunity of appearing on three Albanian National Television Channels. This is only the beginning for Cool Historians as he envisions creating the largest community of history-lovers on all social media platforms; with the current growth rate of the podcast, and I believe that this will be very soon. You can listen to all episodes on Youtube, Spotify, Apple Podcast or Google Podcast.

What’s a party trick or cool fact about you most people don’t know?

Three cool facts about me are as follows, I know 155 flags of the world which means 80% of all flags of the world. I am also a “Movie Nerd”, to the point that on my phone I have a List of Top 30 Favorite Movies with the respective rating. I have been a crazy fan of the Chelsea Soccer Team since I was 6 years old, so much so that I cried when they lost the Uefa Champions League final.

Keep those New Year’s resolutions with Ontario meat and produce